Raizel’s obsession with cinnamon was not assuaged by the cinnamon muffins.  Although my cinnamon muffins were good, apparently, they still did not compare to Cinnamon Pull Aparts.

So, last week, Raizel, her friend Cassy, and Cassy’s mother, Consolita and I had a bonding experience. We baked Cinnamon Pull Aparts together.

As I shared, originally, my niece,  “Yo-Yo,” gave me a great recipe for Cinnamon Pull Apart Buns. However, when the time came to make the recipe, it was too blury to read.

So, Consolita and I did a quick Google search and found this recipe, originally from the Fleishman’s Yeast Company. I altered it slightly, as I made the dough in a food processor, minimized the amount of margarine used, and rolled it out and baked them as a pinwheel slices, rather than as balls of dough.

3 cups all-purpose flour (I use spelt). Add up to 1/4 more to prevent it from being too sticky.

Place flour, sugar, yeast and salt in food processor and pulse to blend. The original recipe called for warming the milk, but, I did not do that. Instead, I added hot water to the milk, together with the oil and the egg, and blended it until it formed a smooth dough.

Kneed dough on a lightly floured surface until well blended and slightly elastic. Cover and let the dough rest for 10 minutes.

Blend together the sugar, cinnamon and melted margarine.

Roll the dough into a rectangle, on a lightly floured surface or between 2 layers of parchment paper.

Spread the sugar, cinnamon and margarine over the dough.

Starting on the long side, roll up dough as tightly as possible, jelly-roll style.

With a serrated knife, slice into ½ inch slices and place pieces closely together cut side down on greased or parchment lined pan.

Bake in a preheated 375*F oven, until done and rolls are golden brown.

For glaze: Mix the icing sugar and milk in a bowl, adding the milk 1 teaspoon at a time. Stir until desired consistency.

These are the original instructions:

Combine 2 cups flour, sugar, dry yeast and salt in a large mixer bowl and stir until blended. Combine milk, water and butter in a microwave-safe bowl.  Microwave on HIGH in 15 second increments until very warm but not hot to the touch (120° to 130°F.  Butter won’t melt completely). Add to flour mixture with egg.

Knead on lightly floured surface until smooth and elastic and dough springs back when lightly pressed with 2 fingers, about 6 to 8 minutes. Cover with a towel; let rest for 10 minutes.

For filling, combine sugar and cinnamon in a shallow bowl.

Cut dough into 36 pieces.   Dip each piece into the melted butter and then roll in the cinnamon sugar mixture.  Place in fluted tube pan that has been generously sprayed with cooking spray.  Combine any remaining butter and sugar and drizzle over rolls. Cover with towel; let rise in warm place until doubled in size, about 45 minutes.

Bake in preheated 375ºF oven for 25 to 30 minutes or until rolls are golden brown. Cool 5 minutes in pan, then invert on serving plate.

Making it it the food processor was much faster and easier!

Here are the pictures:

Mixing dough in the food processor. Much easier and faster!

Rolling out the dough between 2 layers of parchment.

Spreading out the filling over the dough. 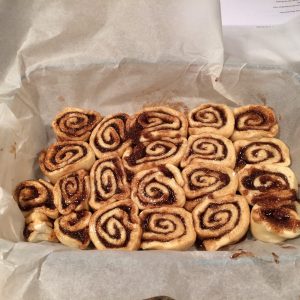 Ready to be iced!

I forgot to take a picture right away. Here are the leftovers.

Final outcome: Raizel and everyone else loved the rolls. The smell of cinnamon was heavenly too!

Overall, this was a successful culinary adventure, and fun too. It turns out that Consolita is a great cook, and she agreed to do this more often. I now have a cooking buddy!

This is almost one of my non-recipe recipes.

My family loves mashed potatoes. However, mashed potatoes are something that need to be made fresh and served immediately. As I am time challenged, I find it difficult to make anything that requires precise timing. Up until now, I rarely made them.

This past week, I was so excited to have discovered cooking the potatoes in the crock pot. The potatoes cooked while I was at work. Then, when I came home, I mashed them just before Shabbat. In very little time, we had wonderful, fresh mashed potatoes.

I know that this seems like such a little thing. But, it was very exciting for everyone. Sometimes, it is the little things in life that count.

Place whole potatoes in crock pot, and add water to cover. Since I made this early in the morning, I added more water than necessary, to avoid overcooking. However, overcooking is not a high risk proposition. Since they are going to be mashed, overcooking will not harm the final outcome.

When I got home, the potatoes were cooked, and not even over cooked!  I peeled them, and mashed them, adding the cooking water to desired consistency. As I mashed them, I added the salt, pepper and olive oil.

Placed whole in the crock pot, cover with water.

I peeled them after they were cooked.

Mashed and ready to serve!

The variations of mashed potatoes are endless. So far, I have not been too adventurous.

My plan was to leave some of the potatoes whole for a potato salad for lunch on Shabbat day. However, that turned out to be unnecessary.  Everyone in the family devoured the mashed potatoes! I actually ran out.  A definite hit!

Now, everyone is looking forward to having them for Shabbat dinner again.  I am so happy that it will be possible to make this dish more often.

This is another recipe from my mother. While we were visiting, my mother had one of her various meetings. This recipe was her contribution.

My mother said that this is her go-to cookie recipe when she is short on time and wants to serve something simple and yet spectacular.

These cookies have an added panache, as you can adapt the flavor with different spices. And, they are also kosher for Passover!

1 lbs nuts or seeds. My mother said that “peanuts are the best, but any combination will work.”

Optional, sprinkle with icing sugar when done, but my mother thinks they are sweet enough.

To give as a gift, place gently into a glass mason jar. Cover and decorate with a nice ribbon or bow. 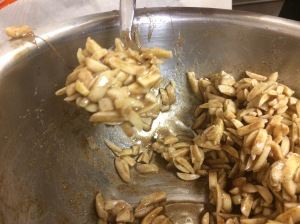 Mixed and ready to drop. 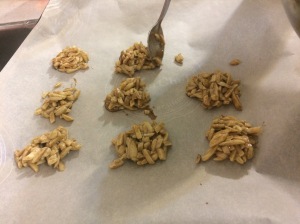 Drop with a spoon onto parchment paper.

In a jar to give as a gift.

For some reason, Raizel has been obsessed with cinnamon. My niece, “Yo-Yo” (this is short for Yocheved) gave me a great recipe for Cinnamon Pull Apart Buns when we went to visit my sister 2 weeks ago for Chanukah.

I have to share how much my niece, Yo-Yo is growing up to be a delightful young woman. Similar to my sister, Raizel, Yo-Yo has developed a passion for baking. The 2 of us enjoyed reading and discussing various cookbooks and recipes. She is truly my sister’s daughter.

However, since I am time challenged, I decided to experiment with this faster Cinnamon Muffin recipe instead. Hopefully, it will satisfy Raizel’s craving for cinnamon. If not, stay tuned for Yo-Yo’s Cinnamon Pull Apart Buns.

Alternative: use water, coconut or nut milk instead. I used rice milk

By hand: combine the flour, sugar, baking powder, cinnamon and salt in a bowl. Mix the eggs, oil and liquid in a bowl. Making a well in the center, add the wet ingredients to the dry ingredients and mix until blended.

Bake in a preheated 350°F oven until done and when inserted toothpick comes out clean.

For fun, I thought I would experiment with making a glaze similar to the one used for the doughnuts, and with cinnamon added as well.

To make the glaze, place equal amounts of sugar and water and the cinnamon into a small pot and bring the mixture to a boil. Cook the sugar, cinnamon and water over high heat, stirring occasionally until the sugar is completely dissolved.

For a thicker glaze, continue to cook the glaze and stir occasionally until it reduces to a thicker consistency, or add more sugar.

When the muffins are done, dip them into the simmering glaze and then place on a serve plate.

Here are the pictures:

Fresh out of the oven! 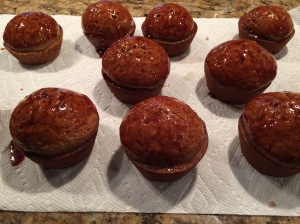 Glazed and ready to eat.

The girls are back at school today, so, it is too soon to tell how much they like them.

However, I love the smell of cinnamon. To me, it is the scent of Ha-Olam Ha-bah (The world to come or heaven).

Postscript: Raizel came home from school today and said, “These are awesome! Wow.” She then spontaneously said, “They still don’t compare to Cinnamon Buns. Can we make them on Sunday?”

I had to laugh when she said that. So much for fast and easy delicious muffins. It looks like we will be exploring Yo-Yo’s Cinnamon Buns recipe next.

Today is the first day of 2017 and the last day of Chanukah.

Best wishes to all for a happy, healthy and prosperous new year! 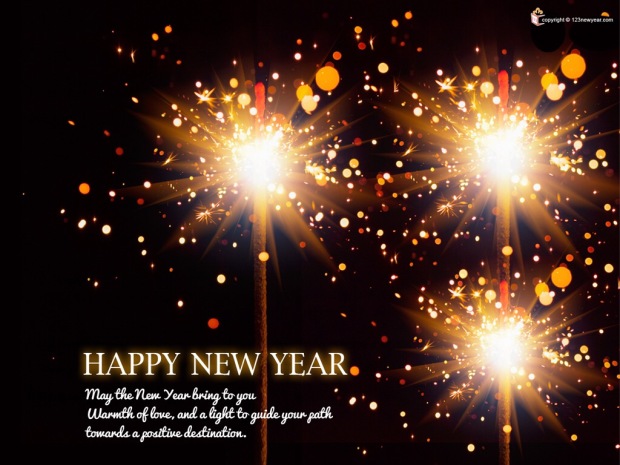 This year, my husband and I had a very funny experience with our candles for Chanukah. I am sure there is a hidden symbolism, but, as of yet, any possible deeper significance is eluding me.

For whatever reasons, we were gifted with several boxes of candles this year. However, when we really needed some to light the menorah last night, we had misplaced them all.

Scrounging around, we were blessed to find exactly nine candles to light — 8 for each day, and one for the “Shamash” (“attendant”) candle. Our own little Chanukah miracle!

In the Jewish tradition, the number 8 is seen as above nature. Therefore, the last day of Chanukah is a very auspicious time to pray for personal requests.

My prayer is for the supernal light of Chanukah to bless us with the clarity to see the miraculous within every aspect of our lives.

Many blessings to everyone!